Image above by cottonbro from Pexels

This article was last updated January 1, 2021

My wife and our dog don’t know that they saved my 2020. Janet will find out how when she reads this. Duke will never appreciate his role. I’ll explain shortly.

There was disease, death, discord and defeat. Distressing division. Confusion, isolation, separation, accusation, and multiple types of cancellation. Unrest, protest and nasal tests. It was year of fear, anger and frustration.

And loss. There was so much to grieve.

There was heroism and honor. Innovation and invention, sacrifice and survival, enlightenment and evolution. There was courage, compassion and creativity. There was discovery and delight.

Babies were born, anniversaries attained (including number 30 for Janet and me), buildings constructed, careers launched. Businesses were founded or expanded—or both—as some people and organizations thrived, soared, and inspired.

Against all odds, concerts and recitals were offered, movies opened and plays were staged. New methods of doing things were devised.

Paintings, photographs and podcasts were shared, albums were released, and of particular meaning to me: Books were published.

I self-published 20 books in 2020. I had a plan to do so entering January, and I was hard at it when the pandemic hit. I must say, isolation was perfect for my work. If anything—I say this gingerly, with regard for widespread suffering—being locked down and sealed away helped me stay focused on this effort, which I called 20 for 20. It was the current phase of the project THIS IS RED, a quest to raise $1 million for our area’s public library, run by my wife Janet, whose early-stage dementia so far does not keep her from working but did spur our moonshot goal. Our aim is to create bestselling books to earn money for Janet’s library.

20 for 20 made my 2020 shine. I know that your 2020 might have been bleak. I’m sad for any sadness that touched you. I can only be grateful for experiencing grace.

My year was defined by what I created. In total, my 20 books make a stack of paper about 6 inches high weighing about 7 and a half pounds. There are well over 2000 pages. Let’s say 2,020 pages for a nice round number.

I like this stack, but then I like nearly any stack of books. I like seeing them, handling them and inspecting them. I like absorbing the craft and thrust of an individual book as well as the overall sense of industry conveyed by collections of books. These are gardens that nourish me, and producing my own books gave a special yield. I enjoyed tilling, planting, tending, weeding—every step of the toil. I rejoiced with every blush of budding and each gradation of ripening. Then came reaping and relishing my crop.

Yes, I found my own books delicious, just as a farmer might savor her own tomatoes. Good food feeds you when you grow it yourself just as it does when you do not. I might not produce blue-ribbon winners—neither do most farmers—but what I raise is at least recognizable as vegetables and supplies some fiber. It tastes good to me and leaves me satisfied.

Last year I had an epic garden. I use this metaphor for my publishing not only because I staked out a huge plot, sweat buckets and feasted, but because there was nearly a devastating blight at the end of the season. This is where Janet and Duke come in.

The first thing I tell Duke every day is, “You’re a good dog. You’re a bad dog, but you’re a good dog.” By which I mean that he only rarely annoying with his barking and begging (unlike me). Duke loves our walks and is supremely fit, but he usually keeps to himself, and his primary occupation is dozing.

His main nest is his dog bed in our living room, but late in 2020, Janet placed an old pillow on our kitchen floor to see if Duke would hang out there sometimes with us, and he did start to doze there sometimes. It was nice to have him on hand—or at foot.

I extended Janet’s experiment to our enclosed back porch, just off the kitchen, where I do most of my writing. I put another old pillow for Duke beside my standing desk. For whatever reason, Duke mostly ignores that pillow, but it lies ready for him. 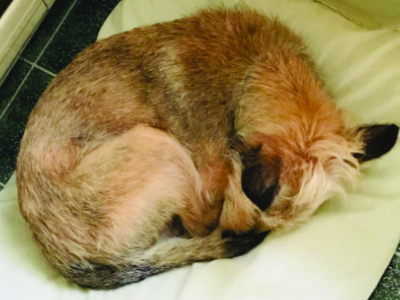 Duke on the back porch pillow

As 2020 dwindled into wintry days with early dusk underlining the ongoing gloom of pandemic and politics, I felt currents of apprehension. These were only faint breezes, because I’m not an anxious person, but I did feel a certain pressure as I neared completion of Book 20 of 20. I found myself dreading a mishap at the finish line. Worries would brush my mind as I fell asleep: What if a fire broke out? Or a tree fell through the porch window? Or …

Or what if I failed to remove my corded earbuds during one quick turn away from my notebook computer, yanking it off my desk four feet in the air?

That final scenario is not something I ever imagined. But that’s exactly what happened one morning early in December.

I lunged for my computer but could not catch it.

all the way to Duke’s empty pillow.

Which had been there only for days.

Yes, there was a thud, but it was muffled. An Apple MacBook is durable—mine has an aluminum body, and I had added a Lucite case—but they’re not made for chest-high drops onto linoleum. Thanks to Duke and Janet, my computer landed on foam, not the floor.

I still expected to find the screen dead or cracked. I have online file backups, but it would have been torturous and expensive to spend the remainder of December regaining lost ground.

I’m overjoyed to say that my computer is just fine. No cracks, no dents, no hiccups. I finished Book 20 of 2020 with weeks to spare.

That was grace. That was unmerited favor. That was my 2020.

Now on my wish list is a dock to keep my laptop secure on my desk. Not to mention a new set of cordless earbuds to use with it.

Higher on my wish list is for our THIS IS RED project to succeed for the sake of our community and perhaps to spread inspiration.

Janet Eldred is a former bookstore executive who completed her 16th year as a library director in 2020. Keith Eldred is a writer, designer, marketing professional and long-time library volunteer. Janet has early-stage dementia. She and Keith are aiming to raise $1 million for Janet’s library while she can still contribute. Their website www.thisis.red presents a plan to donate all profits from 20 books that Keith self-published in 2020, the year that he and Janet celebrated 30 years of marriage. Direct contributions to the Hollidaysburg Area Public Library are also welcome. A donation link is at www.thisis.red/donate.